The paperback edition of #womeninthestudio is out today! Here’s to women in 2021 using the tools at their fingertips to create their own music and construct their own futures. Happy New Year! 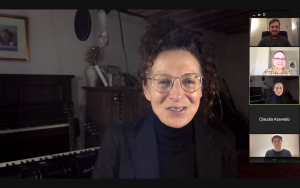 ‘The music industry provides a dynamic and compelling illustration of inequalities in society but it is in the tensions that arise from the compulsion to create, in spite of those inequalities, where the potential for change lies.’ Guest lecture, University of Agder, Norway, 24 Nov.

To support War Child UK’s Coronavirus Crisis Appeal throughout July I’m going to live stream just one or two songs over on the Tiltify platform every Friday at 5. If anyone fancies joining me for an early evening tune, all for a good cause, it will be lovely to see you there. Here’s the link 🙏 x 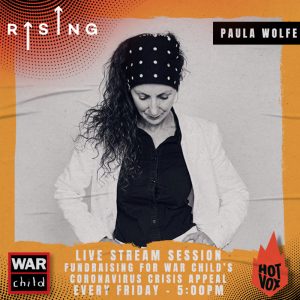 Sunday saw the first  live  stream for War Child UK’s Coronavirus Crisis Campaign as part of The RISING for War Child series. Was delighted to make a tiny contribution to such a massive cause. The campaign will be lasting till the end of July so there is plenty of time to contribute here if you can. Full stream can be seen on YouTube.

Have been live streaming both music and ideas in recent weeks. Last week’s stream was a presentation for the IASPM UK and Ireland online conference on the topic of Anti-Establishment, Rebellion and Commerce  in Popular Music – a timely topic for our times. Here’s the link if you fancy having a listen.

Had a great chat today on the Songwriters Guild Live podcast, talking about songwriting, music production and creativity, as well as playing a few tunes. It was broadcast live from Amsterdam but you can still have a listen to it here.

A little bit of love arrived in my inbox on Valentine’s Day: Women In The Studio has been nominated for the Excellence in Historical Recorded Sound Research Award, from the Association for Recorded Sound Collections (ARSC). Winners will be announced in September.

Well, the year ended on a high note with the official launch of Women in The Studio at the wonderful Innovation in Music Conference 2019. The team did me proud and it was inspiring to hear about so much innovative research taking place around the globe.

Managed also to squeeze in a little bit of video making before retreating for the festive season, the first of which I posted on New Year’s Eve.

Now into the new year and I’m hitting the ground running with the first of the year’s mini album and book tours in a few week’s time. I’ll be kicking off with a show at Birmingham’s Kitchen Garden Cafe on the 20th, followed by Brighton’s Komedia on the 22nd. I’ve invited local artists to join me so they should be great nights. The month will then end with a public lecture at London’s Goldsmiths on the 28th. It’s open to all so hopefully will see some friends down there. 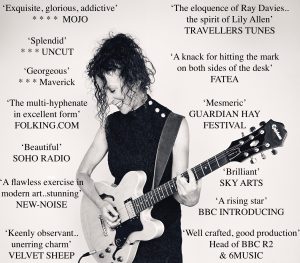 There will be lots more gigs and talks throughout the year,  the release of the remastered and reworked back catalogue, and some exciting new projects, but for now, here’s to a peaceful start for us all to the new decade, ‘let’s hope it’s a good one’.

Nearly half way through the autumn leg of the White Dots/Women in The Studio joint album and book tour. I was in Liverpool at the beginning of this week to give two guest lectures at The Institute of Popular Music, University of Liverpool, the first to some first year students and the second to some  PhD students, popular music scholars and old friends. Having now spoken in 5 different cities in 4 weeks about the book and about the production behind the album and having also offered an ear to the music of some young, emerging artists at BBC Introducing, the burning passion to make it, perform it or talk about it – despite the accompanying overwhelming challenges – shows no sign of abating. Seems a simple question, but what is it about popular music – whatever the genre – and its ability to touch us to the core -whether as creators, commentators or as listeners – that keeps us all compelled?

The nights may be drawing in but I’m going out! 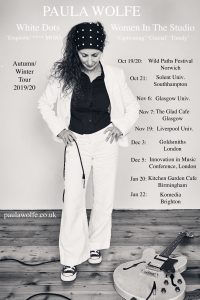 Taking part in the industry round table debate at the wonderful Songwriters Study Event at The Ivors Academy in August was a fitting end to a pretty hectic summer before I headed to the mountains for a much needed break. Here’s a snippet of the day:

September always marks a productive time as we head into autumn and so it was lovely to have been invited by PSN Europe to write about my production and the research behind Women in The Studio for their September issue. Here it is if you fancy a gander?

Final bit of news: we’re busy organising a joint album and book tour for the coming autumn as well as winter and spring 2020. Dates to follow soon 🙂

Today is going to be great. I’m taking part in an industry roundtable debate  at the #songwritingstudies event @IvorsAcademy along with @LadyVMusic , @Michelle Escoffery and @Eamonn_Forde. We’ll be discussing ‘Songwriting, Streaming and Sustainability’. It promises to be a lively conversation! 🙂

Looking forward to the session today on The Other Woman Show at Soho Radio with presenter and journalist Cheri Amour. We’ll be chatting about Women In The Studio and I’ll be playing live 2 tracks from White Dots. We’re on 3- 4pm, so tune in and join us!  https://www.sohoradiolondon.com/presenters/the-other-woman/

Well, the album has been out since the beginning of the month and the book has been out for 10 days and the kind words of support in response to both releases have been hugely appreciated – both on and offline. My thanks to all, especially to those of you who have shared the news, along with the book and album links, among your own networks.

No time for resting on any laurels though! August will kick off to a fine start with an appearance on The Other Woman show on Soho Radio on the 1st, followed by my taking part in an industry round table discussion on Songwriting, Streaming and Sustainability at The Ivors Academy on the 8th before I start the Walking Tour 2019. Details to follow.

As Women In The Studio due out tomorrow, I thought you might be interested in some interviews I did with Routledge a little while ago where we chatted about some of the issues the book explores:

The double album and book launch at The Harrison in London on Monday 1st July was a great success. The new tunes went down well as did the In-Conversation with MOJO critic, author and broadcaster Lucy O’Brien. Lucy did me proud with her insightful questions about the lyrical content of the songs on White Dots and the production process behind them. She also facilitated a great conversation about Women In The Studio during which we discussed some of its central ideas. There was plenty of laughter, though, alongside the serious stuff and some great questions from the wonderfully warm and supportive audience made for a very inclusive and enjoyable  ‘conversation’. All in all a great night and my thanks to all who came. For those who couldn’t make it, the live set was filmed and will be posted up on YouTube very soon.

White Dots is out now on all streaming and download platforms including:

If streaming isn’t your thing, the CD is available from: https://paulawolfe.bandcamp.com/album/white-dots.

Women in The Studio is hot on her heels – out July 12.

The double launch for White Dots and Women in The Studio will take place July 1st at The Harrison, London @7:30pm. A live set of the album will be followed by an In Conversation about the production on the album and the research behind the book with MOJO critic and author Lucy O’Brien.

Come and join us for some chatting and chunes: 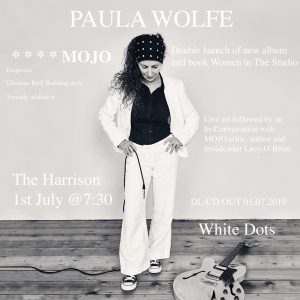 And the wheels are turning on the book:

Read our exclusive interview with @Paulawolfe, author of 'Women in the Studio', a book discussing male dominance in the music industry: https://t.co/0uuvk1zYro
For more information and to get your copy, visit https://t.co/zEkbp6x8y2#RoutledgeMusic pic.twitter.com/L1TbBtN5QZ

Georgia Blue has struck a chord with Travellers Tunes placing her in some fine company.

Throwing my tuppence worth in at the superb Music Connected conference hosted by The Association of Independent Music:

Having sung Georgia Blue in the raw on The Tour De Mont Blanc, on a stairwell in Portugal, on The Camino de Santiago, in The French Alps and in Soho at The Groucho Club,  here now is the recorded version ahead of the full album release. Paula is joined by Owen Morgan on bass, Phillip Trzebiatowski on cello and Jim O’Toole on bass.

We’re looking to release the full album White Dots (* * * * MOJO) in line with the publication of Paula’s book: Women in The Studio: creativity, control and gender in popular music sound production. (Routledge)

The manuscript is is currently being prepared for print. Due for publication June  27.  https://www.waterstones.com/book/women-in-the-studio-creation-control-and-gender-in-popular-music-sound-production/paula-wolfe/9781472474872

White Dots receives strong support in the January Issue of: 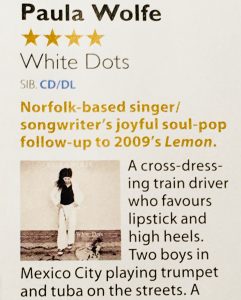 Paula’s back catalogue has been remastered  and will be re-released following the  release of the new album.

Paula is now back from her very successful pre-release European Walking Tour 2018. Photos and videos can be seen on FB and @paulawolfewalking

Paula is due to release her third album in line with the publication of her book:

The British Academy of Songwriters, Composers and Authors (BASCA) invited Paula to take part in a panel discussion they were hosting around the topic of gender equality and diversity in music.It was in collaboration with the Swedish Composer organisation FST and took place on 28th September at 3pm at London Southbank Centre.