2021. New free featured content on Bloomsbury Popular Music, which explores Gender and Sexuality in Popular Music Studies. Curated by Lori Burns, Professor of Music at the University of Ottawa:

‘In her chapter on gender and music production in Critical Approaches to the Production of Music and Sound, Paula Wolfe shines the spotlight on female artist-creators, studying their creative production processes with the aim of revealing the significance of gender within industry practices. From this lens, Wolfe is able to illuminate aspects of authorial control, intentions, and expressive power in the recording studio. Taking two case studies—1) Molina, female artist and self-producer; and 2) Hostile, male producer of the all-female band Savages—Wolfe’s ethnographic approach teases out a myriad of critical concerns for the production of music as a gendered practice. Ultimately, Wolfe raises points that will lead to interesting future debates about musical conventions and the gendered implications of negotiating such constraints: “When positioning the work of both Hostile and Molina in the framework of a gendered contemporary music industry culture, Hostile’s sonic control as ‘producer’ adheres to ‘patriarchal assumptions’ (Mayhew 2004) inasmuch as Molina’s control over her own sound challenges them.” ‘ 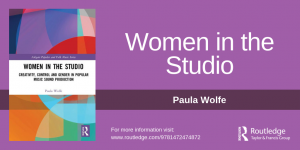 ‘This book addresses an important theme of scholarship on music, one that has substantial ramifications for the creators of music: gender bias in music production. As with many important topics of research, it is hard to study. Even though the last couple of decades have seen an increasing awareness of the problems of gender inequality, there is still a considerable need for research that formulates good questions and which develops thorough answers. The book, Women in the Studio: Creativity, Control, and Gender in Popular Music Sound Production, offers numerous reflections on the problem, asks many questions and suggests several answers concerning the roots and forms of gender bias in music production.’ Kjus, Y. (2020). Popular Music, 39(2), 373-375. doi:10.1017/S0261143020000306

‘Although the title speaks of the studio, Wolfe’s subject really is the music industry itself in all its heterogeneous vastness and how its systems rewind and replay all manner of structural discriminations.’ Gray, L. Wire, Issue 431, January 2020

“A fascinating and timely book that explores the role of female producers in the music industry – both as DIY artists and in commercial studios. Wolfe reveals through in-depth interviews and analysis that female producers are a growing community, but they are still under-represented in the media, and marginalised by a music press that ignores their work amid a gendered discourse appealing to a male audience. An artist-producer herself, Wolfe presents a crucial insider view. Read it now!”
Lucy O’Brien, author of She Bop: The definitive history of women in popular music (2020)

“Women in the Studio is an important and timely contribution from Paula Wolfe, which unpicks the entrenched inequalities of the music industries and lays them bare. More than that though, through its deep engagement with the voices of women in the field of music production and the realities of their agency in the recording studio, it offers productive insights into how women can, and are, breaking down the structures and values that have for so long been erected to contain them. For the emerging field of Songwriting Studies, Wolfe’s attention to the female singer-songwriter serves as a powerful reminder of how the creativity of women has been marginalised and why there is hope for change and new understanding.” Dr Simon Barber, Birmingham City University 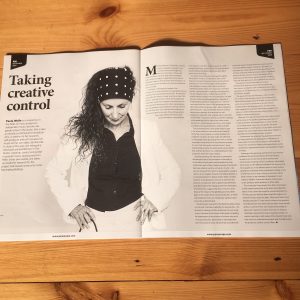 2016. ‘I write the songs. He’s the eye candy’: the female singer-songwriter, the woman artist-producer and the British Broadsheet Press in Green. S and Marc. I., eds., The Singer-Songwriter in Europe:Politics, Paradigms and Place (Routledge, London, New York) https://www.routledge.com/The-Singer-Songwriter-in-Europe-Paradigms-Politics-and-Place/Marc-Green/p/book/9781472452108

2012. A Studio of One’s Own: music production, technology and gender.Journal on The Art of Record Production, Issue 7. http://www.arpjournal.com/asarpwp/a-studio-of-one%E2%80%99s-own-music-production-technology-and-gender/

2020.‘Busking by app – that’s not how it should work’ (Crispin Hunt, Chair of The Ivors Academy, 04.06.2020): creativity, community and survival in the streaming age. London Calling, IASPM UK and Ireland Online Conference, University of West London. 9 June.

2016.‘When the screen disappears, and even though you’re looking at it you’re only hearing and listening to music, only then I know that I may have something good’ (Juana Molina, 2016): music production, creativity, genre and gender. 11th Art of Record Production Conference (ARP), University of Aalborg, Denmark.2-4 December.

2014. Between the Private and the Public: the artist-producer and hybrids of production practice in the digital era. 9th  ARP Conference, University of Oslo, Denmark. 4-6 Dec.

2014. ‘I’ve got to trust myself coz there’s no A&R dad who’s gonna take the rap for me’ (Little Boots, 2013). Self-production, self-releasing: new industry and gender. IASPM UK and Ireland Conference, University of Cork,Republic of Ireland. 12- 14 Sept.

2007.Will you be my Friend? Digital technology, the fan, the artist, the label: democracy for all?  14th IASPM Biennial Conference, Universidad Iberoamericana, Mexico City. 25-29 June.

2005. A Studio of Her Own: Self-production and the Female Independent Artist. 1st ARP Conference, University of Westminster, London. 17-18 Sept.